The Mystical World of Dadabulous

So I was a bit nervous asking my good friend Mumabulous to guest post as part of my Mums on Dads series. I didn’t know wether to paint on my own abs to compete with the flood of crumpet normally displayed on her own hilarious blog or simply not wash for a few days to look a little more Bear Grylls (one of her favourites). My compromise was to do some work in the roof to get the “wilderness” look and then walk around sucking my breath in for the rest of the weekend.

Come Sunday night and after some solid pressure from the wife I have relented and showered. I’ve also eaten party pies for dinner and can’t be arsed sucking my stomach in anymore. If like me, you’re also sitting comfortably, recovering from your weekend then please enjoy Mumabulous’s response to my blogging challenge of telling us a bit about the other part of the ‘abulous’ team.

If she’s new to you, check her blog out here. She is also on twitter here and Facebook here.

The Mystical World of Dadabulous

On the Mumabulous I  have written the odd tongue in cheek piece bemoaning the fact that my husband aka Dadabulous, does not understand a) the female mind in general and b) by extension my mind.  For instance he constantly poo-poos my anxiety about the “deadly” white tail spider merely because the white tail spider has never actually caused a human death. He is also nonplussed by the Chez Abulous’ problematic shortage of toilet brushes. We have five toilets and only three brushes between them. This is the source of much consternation for me but Dadabs (quite condescendingly) tells me not to “worry my pretty head about it”. Here on the Illiterate Infant blog I am about to make an earth shattering admission. The chasm of non-comprehension between the sexes runs both ways.  Dadabulous’ mental landscape is baffling terrain indeed.

Here are some things about my husband that are as mysterious as they are marvelous.

I can nerd it up with the best of them when the sci-fi is of good quality. I regard Firefly as one of the best TV shows of all time. I even have a soft spot for the clunky old BBC series Blake’s 7. Dadabulous on the other hand will watch/read sci-fi simply because it is sci-fi. Recently he recorded the Star Trek spin-off series Deep Space Nine and faithfully watched every episode even though he claims not to like it.  He refers to it as “Deep Shit Nine”. He doth protest too much, methinks. 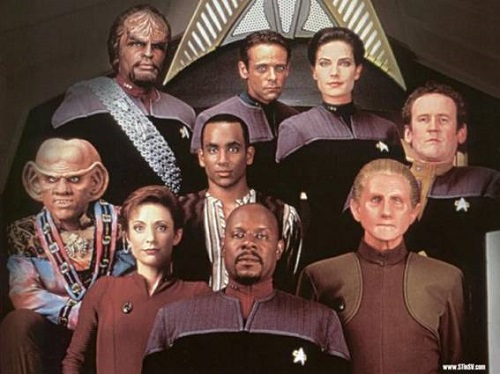 but Firefly is hawt.

In the same vein the hours that Dadabulous has given over to computer games baffles me completely. On a scale of 1 to 10 my interest in gaming is about  -100. However its been a life long love affair for Dadabs. He was coding his own simple games at age 17 and tried to persuade his father to build a computer from its component parts. Doubtless my teenage self would have ridiculed this and run off in pursuit of some black clad artist/muso/ out of work actor. Now I’m a bit more clued up I realize that I owe a debt of gratitude to computer games. They inspired a successful career.

Dadabulous is attuned to sound and picture quality in a way that I simply am not. So sensitive is he to subtle nuances in images and sound, I think he must have dog eyes and ears.  He is certainly one to complain loudly when he encounters a substandard TV screen or sound system.  This has motivated a never ending quest for the perfect home entertainment package.  Currently it takes the form of  a complicated media centre which is basically a computer hard drive which commands the TV.  Of course  he hand built the thing from its component parts. It took hours of painstaking work to rig up this delicate piece of  equipment. Operating it requires a degree in computer science, particularly when Blu Ray technology is involved. I occasionally joke about swapping Dadabulous for Michael Fassbender but seriously the Fass wouldn’t last a day in Chez Abulous. Whilst the Fass has a track record of hooking up with his glamorous co-stars, I’m sure hooking up our media centre would be beyond him.

Dadabulous is hardly a hipster but he’s the ultimate creative in my view. He can conjure an idea and bring it to life.  This applies as much to old fashioned wood working as it does to fancy schmancy electronics. Sometimes he’ll combine the two like with P1’s famous butterfly bed. He made it entirely from scratch and wired it up with fibre optic tubing.

P2’s private castle was an even more ambitious project. Not only does it have its own lighting, it boasts a slippery slide, a stain glass window and its own tapestry.

because a princess needs a castle

The beds are a striking example but he is constantly creating and building with his software business. To him its par for the course. He wonders why other people aren’t the same way.

Dadabulous can comprehend things that I don’t have the foggiest clue about and do things that I wouldn’t even think about attempting. In some ways its challenged and extended me. In others its made me lazy. I mean who needs to learn about these new fangled computers when you’ve got reliable IT support 24/7. Most mysteriously of all, Dadabulous can love and accept me when I can’t do the same for myself. I wouldn’t trade him for all the crumpet in the world. Even if Colin Firth pulled up our driveway in a vintage convertible Merc and said “Mumabs come away with me” I would surely be home in time for dinner. Dadabs BBQ platter is to die for.

Does your husband/partner occupy mystical realms?

7 Responses to The Mystical World of Dadabulous